As a first step in developing the Project, the Parts List should be developed with the available parts and assemblies information, containing all the tangible and functional components that can contribute to the cost of the Project. The components may be numbered in the form of a Simple Parts List or contain layers of hierarchy, in which case, it is a Structured Parts List.

The following are some guidelines to keep in mind, when developing the Parts list: 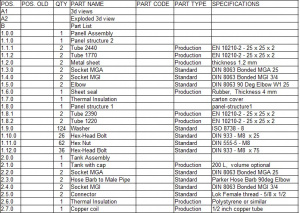 Names of parts, assemblies, specifications and other technical information should be written in English, it is recommended to use deepl.com. At the beginning of the Parts List, the following lines should be included:

For validation in OHO, the developer must deliver The Parts List preferably in CSV format, with UTF8 encoding, however, it can be an excel spreadsheet with the required information, this allows highlighting the data with comments, cell colors, among others.

According to the application, the following materials are preferred:

For standard components such as fasteners, pipe fittings, among others, search in the following order:

Here are some useful links for commercial and standard components: