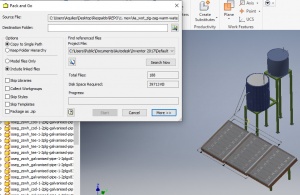 During the process of modeling parts and assemblies, the automation tools of the used programs should be used, as in the case of Inventor:

This facilitates and optimizes subsequent processes such as structure analysis, pipe modifications, sheet thickness adjustments, among others.